Youth Player Aiden Rose is King for a Day

The 14-year-old meets NHL heroes and dons an L.A. sweater at a March home game

Until last month, the closest Aiden Rose got to the Los Angeles Kings was watching them on television from his Charleston, South Carolina, home.

Thanks to the Make-A-Wish Foundation, the 14-year-old Rose, along with his parents Mike and Katie and younger brother Collin, traveled to Los Angeles to get up close and personal with his heroes.

The trip included shaking hands with Kings players and coaches, signing a one-day contract to become an “official” member of the team, leading the team onto the ice for warmups before a game, and practicing with them the next day.

“I was speechless,” said Rose, who plays for the Jr. Stingrays of the Charleston Youth Hockey Association (CYHA). “I couldn’t think of anything to say. I was in shock.”

On July 17, 2017, Rose was diagnosed with adenoid cystic carcinoma (ACC), a type of oral cancer that affects secretory glands, usually found in the head and neck. Rose had been experiencing pain on the left side of his head and face, particularly while eating. Doctors at the Medical University of South Carolina (MUSC) performed a biopsy and removed a parotid gland — a salivary gland on each side of the mouth and ears. The results came back positive for ACC.

The doctors recommended Mike and Katie take their son to Jacksonville, Florida, for proton radiation therapy, which uses high-energy beams to treat tumors.

“My wife stepped up and took charge of the house and Collin, while I took Aiden down to Jacksonville,” explained Mike, a law enforcement instruction specialist for the Department of Homeland Security. “We’d leave Charleston Sunday evening, spend the week and come home Friday night or Saturday morning.”

Hockey remained a major part of Aiden’s life during treatment and recovery. The Stingrays and CYHA eased the family’s financial burden by providing a scholarship to cover playing costs last season. Aiden’s coaches and the league were extremely supportive and flexible with his practice schedule.

“The league [told us] don’t worry about it; the team would understand if he’s not at practice, to make sure he has something to look forward to,” Mike said. “That speaks volumes for what the hockey community does for these kids.” 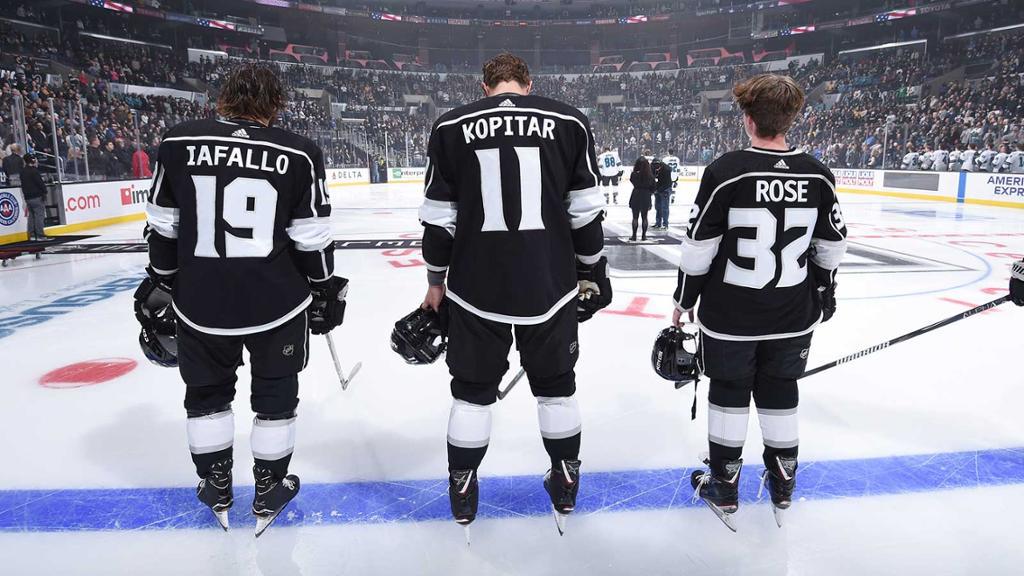 Aiden became a Kings fan after seeing them on television one day when he was seven. It was their black uniforms more than the team itself that drew his attention, since he was still too young to really understand sports. But he continued to follow the team as he grew older. It was while he was undergoing treatment for ACC that Katie contacted Make-A-Wish in hopes of arranging a meeting.

“I went online and put in an application; I thought we had nothing to lose,” said Katie, a curriculum developer for the College of Charleston. “A couple of months later, we got a letter in the mail, saying they had decided to grant him a wish. We told Aiden, and he was very excited.”

After arriving in Los Angeles, Aiden was introduced to Kings Chief Operating Officer Rob Blake, who gave him a contract to sign. Recalling the moment, Katie quipped, “Aiden forgot to make them fill in the money section.”

The Kings were scheduled to play a March 21 home game against the San Jose Sharks. After the contract signing, Aiden joined the team in the locker room. What he thought would be a simple meet-and-greet turned into something much bigger, as he dressed with the players and led them out on the ice for warmups. He also got to meet actor Will Ferrell, who appeared as his “Anchorman” character Ron Burgundy to do TV commentary during the second period of the game, which the Kings won 4-2.

It was there, among the cheering fans and national television cameras, that the significance of the moment hit him.

“I was shaking the entire time,” Aiden said.

Out on the ice, Aiden went 1-on-1 with Kings goalie Jonathan Quick, and put the puck into the top right corner of the net for a goal.

The next day, Aiden and Collin were both invited back to practice with the team before the family returned home with memories that will last a lifetime. While doctors are hopeful, the family has learned to live one day at a time. But Aiden has an even bigger dream he’s shooting for.

“Return as a professional hockey player on the Los Angeles Kings,” he said.