Coaching and Correcting the Fundamentals of Skating

Ice skating is a specialized form of movement compared to other sports. Hockey players need to learn the biomechanics involved in producing speed and power on skates, which is different from other youth sports such as basketball, soccer or football, where youngsters can use the motor patterns they have been developing since they were one.

While players don’t need a doctorate in kinesiology to attain a great skating stride, they do need to learn a number of lessons through a progression before graduating to proper form.

Carrie Keil has been a power skating instructor for more than 30 years. She has helped teach some of the best American-born ice skaters as the power skating coach for USA Hockey’s National Team Development Program (NTDP) since 1999. 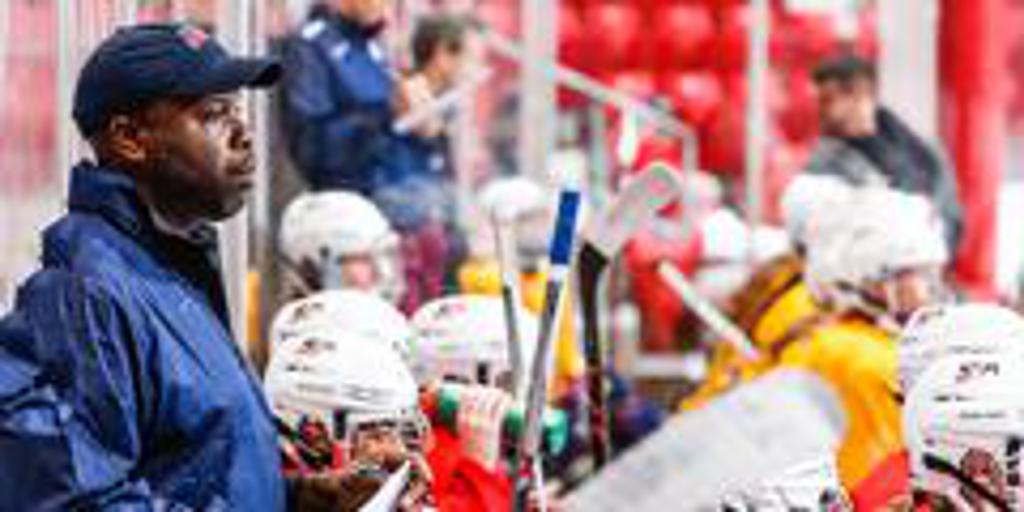 Just like a toddler learning to walk, skaters need to begin with the basics. Keil said there are two keys to a good stride.

“The most important things are going to be your knee and hip flexion, which is a fancy word for knee bend and being able to flex at the hips because you have to be able to get down low so that when you take a skating stride, you get a long stride and full extension,” Keil said.

The first homework for beginning skaters – whether it’s an adult or a 5-year-old – is learning to get comfortable in bending their knees.

“That also serves the dual purpose of lowering the center of gravity closer to the surface of the ice,” Keil said. “So, your balance is improved when you bend your knees and bend your hips.”

The first thing Keil looks for in a good stride is a player’s posture. The thing often happens with young players when Keil tells them to bend their knees: they bend over with their back.

“If you tell a 5- or 6-year-old to bend their knees, 90 percent of the time they drop their head and bend forward,” Keil said. “Posture is number one. If your posture is incorrect, it lends itself to other incorrect motor patterns. Players who tend to lean forward too much tend to have that wide, railroad short choppy stride.”

It’s difficult for players get any stride recovery and return their legs back to the midline of their body if they overbend at the back and have a choppy stride. When you’re bent forward, your arms tend to swing side to side a little more or more in a circular motion versus a runner’s sprint.

“It also has a lot to do with balance and power generation,” Keil said. “When most of your weight is centered over your hips, knees and skates, then you go to take a stride, you’re going to get 100 percent of your power potential with your weight and leg strength. If you’re leaning forward, you’ve taken some of what you weigh off of your hips and skates, so you’re already compromising how much speed you can generate.”

Unfortunately, even as important as skating is to a hockey player, repetition can get old fairly quickly. The most important thing, especially at the younger ages, is that drills or form a coach is teaching needs to be fun. Kids need to stay engaged.

“You need to find ways to work on the knee bend and hip flexion that they think is fun. One of the things I like to do and the players seem to enjoy it is start on the goal line, get up some speed and at the blue line see if they can go all the way down into a full squat with their rear ends just a couple of inches away from the ice – so really getting down low,” Keil said.

She said that this drill gets players much lower than they would actually need when skating, but coaches need some overkill when introducing the idea of knee bend.

“If you only get them bending a little bit, they’re going to bend even less when they are skating,” Keil said. “If you can get them to bend maximally, then they’ll bend adequately when they’re actually skating.”

Additionally, bending into a full squat is something players can do for dryland that can be part of their pre-practice warmup. Getting players engaged in a friendly competition is also a way Keil keeps the curriculum fresh for young students.

“Getting them to squat down and have a friendly competition to see who can hold it the longest,” she said. “Have them counting because kids love to count. That keeps kids engaged and then they think it’s fun.”

After players can get into a full squat, they can move onto more complicated coursework. A good drill is the Russian Knee Drill: tap one knee down on the ice and then alternate back and forth between knees. The players should stay low and alternate the knees touching the ice by scissoring and without standing all the way up. It can be done both forward and backward.

“It’s a progression because you’re activating the core to balance, especially when you switch your legs,” Keil said. “Most players will drop their heads and chest, but with the Russian Knee Drill, you’re engaging the core, which has implications on balance, be it making a check, receiving a check. When they’re older they need to be able to engage their core. If it’s something they’ve been doing since they are 5 or 6 it becomes an innate concept and something they already can do.”

There are a lot of progressions – going all the way up to the Shoot the Duck Drill where you try to get all the way down on one leg with the other leg sticking straight out in front of you. Additionally, jumping drills, over sticks or black barriers found at many rinks in the U.S.

“When you jump, the only way to jump is to bend your knees and then use your explosive motor patterns to spring up off the ice and then you also need to land in a deep knee position to maintain your balance,” Keil said “If you land on straight legs, you’re going to bend at the waist and fall.”

It’s nearly impossible to teach skating through verbal instruction and pretty much impossible to break bad habits through lecture. Skating is all about visual learning.

For years, Keil has taught mechanics on a skating treadmill in front of a full-length mirror.

“It has been nothing short of remarkable what can be accomplished when players can see themselves. We’re visual learners and I’m finding I can correct a player in one to three months on the treadmill, what used to take me a year or two on the ice,” Keil said.

There’s some negativity out there about skating treadmills because some players’ experience has been with someone who doesn’t teach form and technique and, “just use it as a conditioning tool where they crank up the speed and elevation,” she said.

“You see it in the mirror, you get results very quickly,” Keil continued. “There are ways to fix their posture. There are visual clues that they can see that one leg isn’t recovering or one leg isn’t striding fully out.”

And if you don’t have access to a skating treadmill, Keil suggests using the available technology in our pockets to correct skating habits.

“If you’re going to work with a couple kids at a time, I’d suggest videoing them and being able to show them what it is you’re trying to get them to change,” Keil said. “Auditory commands for kids are just another adult going, ‘Blah, blah, blah.’”