High-level coaches presented to regional coaches between the game action

HAMDEN, Conn. – While the current generation of collegiate women’s hockey players was going for a national title this past weekend, the seeds for the next generation were being planted next door.

An expansive curriculum covered a range of topics related to girls and women’s hockey, with high-level coaches and Olympic champion Meghan Duggan among those presenting to a full complement of regional coaches on hand.

“We hope that every coach here will be able to take at least one part of the curriculum back to their respective programs,” said Kristen Wright, a USA Hockey American Development Model regional manager for female hockey. “When discussing skill development, the presenters provided tangible concepts that the coaches can use with their own teams.”

Wright, a former player herself at Connecticut College, joined USA Hockey in 2014 and works with programs, coaches, players, administrators, and parents around the country to educate them on girls hockey and the American development model.

“The game, especially on the female side, has become more skilled over the past five years due in large part to USA Hockey’s implementation of the ADM,” she said. “When you look at where we were and where we’re going, the amount of girls playing and their ability level is far more competitive, but also more fun.” 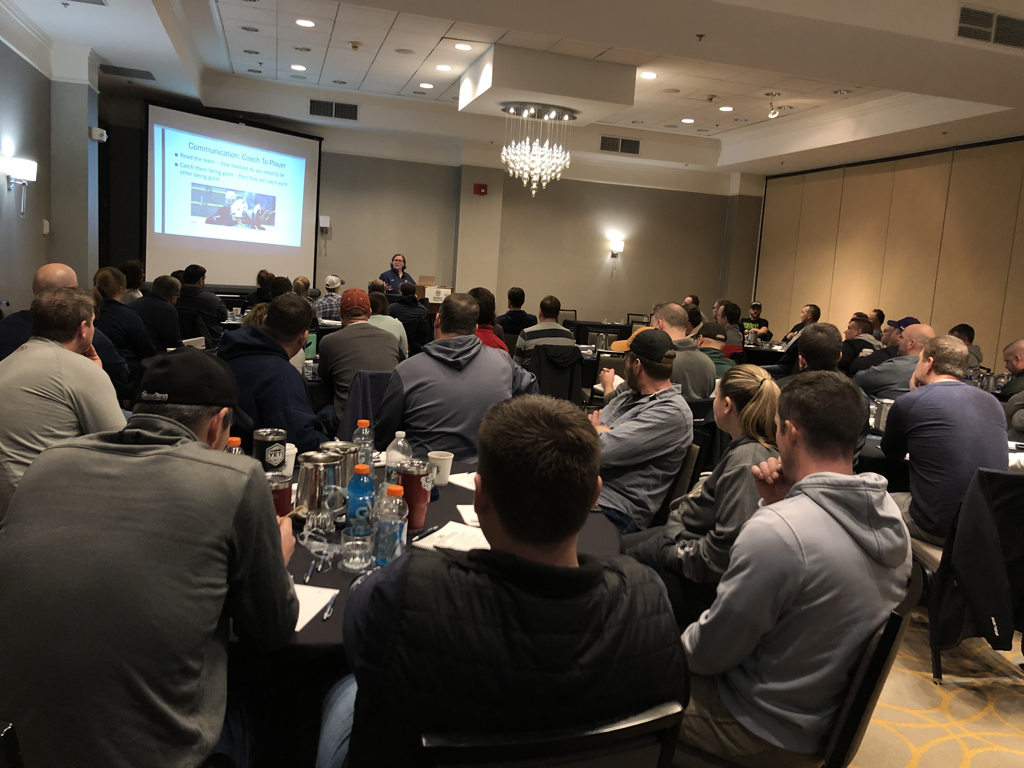 One reason for the growth on the grassroots levels is the continuing growth at the top levels. A number of collegiate coaches along with a handful of national team staff attended the symposium. Duggan, a three-time U.S. Olympian and seven-time world champion, provided opening remarks. In addition, women's national team head coach Bob Corkum joined Duggan, USA Hockey Executive Director Pat Kelleher and Katie Million, who was recently named director of women’s national team programs, in a lively panel discussion on the opening day of the clinic.

Mary Gibson-Merenich is a coach for the Lady Patriots, a girls program with teams from 10U through 19U based in Bucks County, Pa. She applauded the current model of education on the women’s side.

“This is one of my favorite clinics because it’s specific to females,” she said. “In that regard, we have more women who have been through the college program who have the expertise, who are getting to be head coaches now. The fact that we have women who can relate to it specifically provides a comfort level, which is great. They’re answering the needs of the coaches, not just based on what they thought we should know, but rather a combination of both.”

In addition to fundamentals such as practice planning and skill development, sessions at the symposium covered other topics including the mental approach and various off-ice preparations.

“Nutrition, stretching and weight training are a few of the things I never received when I began to play,” Gibson-Marenich said. “Thankfully the knowledge is funneling out to our girls as well as women players and that’s ideal.”

The initial day of the symposium closed with an on-ice session at Northford Ice Pavilion, a short drive from the Frozen Four site at Quinnipiac University.

“We spend a lot of time making sure our coaching education program continues to evolve as new information and research comes out,” said Wright. “We want to give our coaches the best tools to be good coaches. We're proud to see the amount of passion from them.”

“There’s more quality on the ice than ever before,” Gibson-Marenich said. “Even over just the last two years, the skill level has been amazing to watch.”