With each successful performance on the ice, Josh Pauls was fielding more and more requests to speak about his journey in life and hockey.

A double-amputee at just 10 months old, in 2010 a then 16-year-old Pauls was the youngest memebr of Team USA’s gold medal-winning team at the 2010 Paralympic Winter Games. After helping the U.S. win gold again in 2014, Pauls captained the 2018 U.S. entry to an unprecedented third-straight gold medal in PyeongCHang, South Korea.

The talks went well. So well, in fact, that Pauls decided to pursue motivational speaking as more than just a hobby.

The journey into this new career, much like his journey into sled hockey, wasn’t planned. After graduating from Lindenwood University in St. Charles, Missouri, Pauls found himself, like other recent graduates, searching for a job. The challenge for him, though, was finding an opportunity that still provided enough flexibility for him to continue competing with the U.S. National Sled Hockey Team, particularly as the team entered as a season that would conclude with the 2018 Paralympic Winter Games. 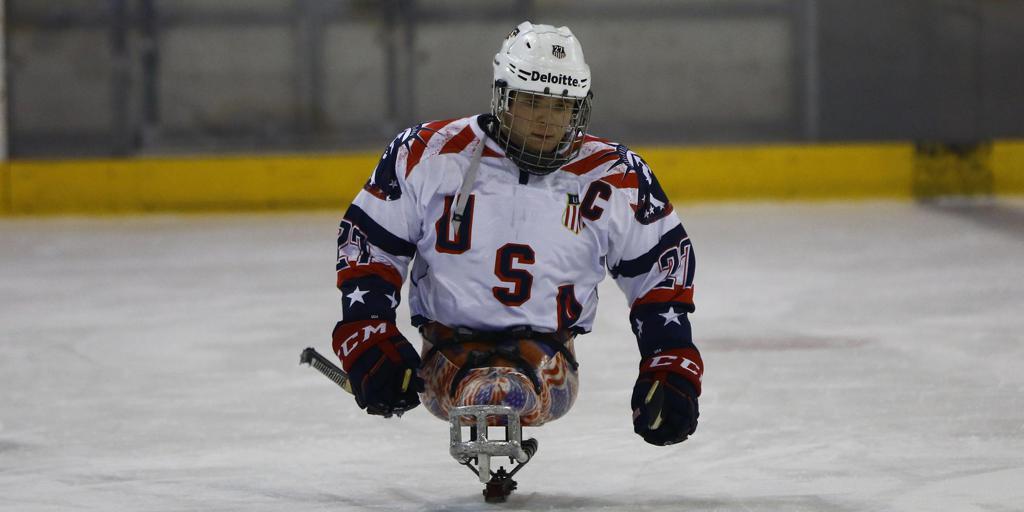 He ultimately found an opportunity as an account executive for a company that provides financing for contractors. The role, in many ways, was a perfect fit. Not only was he enjoying helping HVAC contractors with financing, he had management and company support with his on-ice goals.

But as more speaking opportunities arose, he found himself more and more drawn to the impact his stories of overcoming adversity had on those who listened.

“The more I did it, the more I realized I enjoyed it,” said Pauls, 26, who was born without shin bones, which led to his double amputation less than a year into his life. “I loved seeing the ‘Ah-ha!’ moment people get when I am speaking.”

Pauls’ career shift to motivational speaking accomplished a couple of things. For one, it put him into a career path that was driven from a hobby. It also allowed more time to be dedicated towards his sled hockey career. But, the move also created time to focus on writing a book.

Since October, Pauls has had a handful of speaking engagements, primarily in the St. Louis area, talking with sled hockey teams, stand-up hockey teams and other groups.

“They’ve gone well,” Pauls said. “Everybody has been really receptive to what I’m saying, the lessons I’ve passed on.”

Among the stories Pauls relays is learning how to go down the stairs when he was about 5 years old. His mechanical knee joints bent whenever they needed to, which made conquering stairs difficult.

“What if I tried going backwards?” Pauls thought. “The solution isn’t always easy. Sometimes you’ve just gotta find a way to set that goal. I had a goal. I had to get downstairs because there’s stairs everywhere. And I can’t take no for an answer.”

His storytelling has been enhanced with the research he is doing on his book, which is currently in the editing process and slated to be published this fall. When Pauls talks about an experience, his book coach asks, “Is that something you learned?” And that has helped Pauls delve deeper into each situation to understand why and how it happened.

“Writing the book has really helped because it’s given me the chance to reflect on [life events],” he said.

For all that Pauls has accomplished off the ice, what he and the U.S. National Sled Hockey Team have done on the ice is just as impressive.

He debuted on the national sled hockey team at age 15, won a Paralympic gold medal at 16 in Vancouver (2010) and added golds in Sochi (2014) and PyeongChang (2018). Pauls also has three world championship gold medals and hopes to help the U.S. win its fourth next month in Ostrava, Czech Republic. He went from being cut and then reinstated to the roster just before the Vancouver Games to being named team captain for PyeongChang.

For all he has experienced in the sport – the gold-medal games, being cut and brought back – his role as captain has been his most humbling.

“It’s definitely different,” Pauls said. “I think it was more of a shock last year, because it was my first time being captain and it being a Paralympic year of all things, so it was a lot more pressure. I think I’ve grown into that role. I think I’ve learned more not what to do than what to do.”

Now in his second season as captain, Pauls will lead the top-ranked U.S. against second-ranked Canada — the team the Americans beat 2-1 in overtime for gold in PyeongChang — in a two-game series March 21-24 at Indian Trail, North Carolina. The two teams, which have each won three of the last six world championships, will then meet again at the World Para Ice Hockey Championship from April 27-May 4 in the Czech Republic.

While his playing career has had a few ups and downs, he is feeling good about where his game is now. Part of that is due to having more time to sharpen his game and a new coaching staff.

“I felt better in November [at training camp] than I have in the last two to three years,” Pauls said. “My hope is that there’s more success for us here down the road, which can then turn into more lessons I can share for years and years to come.”